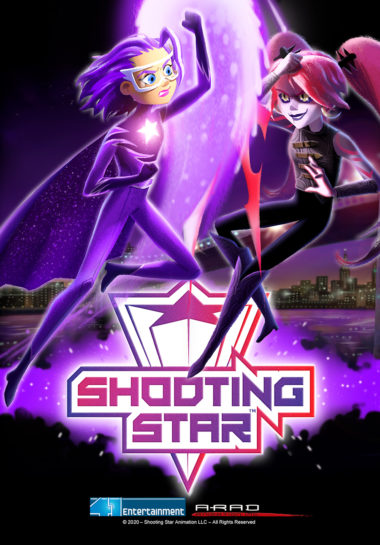 Created by Avi Arad and written by Eric Rogers and Josh Haber, SHOOTING STAR™ is the story of a 13-year-old girl, Piper Realto, struck by a sentient star while playing soccer with her friends, and finding out that her life is changed forever as she is unwittingly transformed into the superhero: Shooting Star. As an inexperienced, super-powered, cosmic champion, Piper must protect the star from those who would steal its power for themselves and use it to conquer the universe - namely the Galactic Scourge. Led by Ecliptica, this evil band of villains takes the form of "teenagers" and enrolls at Piper's school to track down and defeat the "Earthling" protecting the star. Set in New York City, this battle of good-versus-evil is juxtaposed against the roller coaster ride of adolescence as Piper (along with her best pals, Lily and Anton) has to balance her life as a junior high school student with being the hero destined to save the world... and maybe the entire universe! Action comedy created by the former Chairman of Marvel Studios and masterfully written by well-known writers Rogers and Haber.